If you have always wanted to learn how to play 9 ball pool, you finally hit the jackpot. We will give you an inside on pointers that will make you a threat.

The 9-ball pool is a very simple and easy game to catch on to, the gameplay is consist of 9 objective balls counting in order from 1 to 9, the cue ball would then make it 10 overall balls on the table for this game. This game originated in the 1920s by the Americans in the United States of America, the reason I brought this up is that for some reason people keep thinking that the nine-ball pool game is new.

It is common that more people are familiar with the 8-ball pool but the 9-ball pool is been popularly played all over the world as well, it’s far from a new addition to the game. below I will be explaining the simple factors of how the game is been played.

How To Play 9 Ball Pool?

So, 9 ball pool is the most orderly pool game I would say, the format of which this game is been played is for you to pocket the lowest ball counting up to the 9-ball. In this game, the 9 ball is the most important ball on the table, if the 9 balls is been pocketed without you pocketing the other numbers directly, this will be a foul in the game causing you to lose the game.

However, it is legal to use a lower number object ball to pocket the 9 balls at any time if you get the chance to do so. This can only be done in the format of, for example, the cue ball plays a low-numbered ball hitting the 9 balls then pockets it without scratching, which would lead to an instant victory. The next thing to keep in mind is that you can only play the shot of a lower-numbered ball in which you are to play, you skip out any numbers in the game, can pocket 1,2,3, and then skip to 5, that is automatically gonna be a foul.

The funny this is, most of the rules are basically the same in most of the cue sport games if you foul the opposing player they will get an advantage of the ball in hand play, giving them an advantage of placing the cue ball anywhere on the pool take to take their next shot. So if you are familiar with all the rules in the eight-ball pool, I am sure you will know what you should not do.

If you do not know, here a the shortened versions of what not to do and all the plays that could lead you to lose the game.

Racking and Breaking in 9 Ball pool 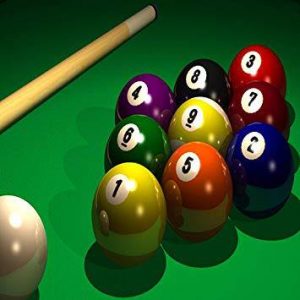 The original rack would be a diamond-shaped rack, specially made for 9-ball game racking, however, you can also rack a 9-ball game with the triangled 8-ball rack as well. The Nine-ball pool will only include 9 balls playing on the pool table that will be in the racking, from numbers 1 to 9, the game will be racked in a diamond shape format, with the 9 balls in the middle and the 1 ball at the tip of the diamond-shaped racking format.

It doesn’t really matter where the other numbered ball is in the rack as long as the 9 ball is in the middle and the 1 ball is at the top of the diamond-shaped racking.  We know you may see other players breaking from all angles of the table but to be honest, the most efficient way to break in nine-ball is to aim directly for the ball that is on the top, the extreme top of the racked balls.

If on that break the 9 balls are being pocketed in any of the 6 pockets that are on the table without scratching the white cue ball, the breaker then becomes the victor of that game. However, if that player breaks and pockets the cue ball as well, the breaker would lose the, if the cue ball goes off the table, the breaker loses game as well. If the breakers break and no ball is been pocketed the opposing player gets to play if at least 3 of the balls are positioned at any of the rails (side), if not it’s a re-rack.

Who breaks first in 9 Ball Pool?

It is not hard to figure out who breaks first, the lagging method worst just fine for all competitive games but if it’s just a friendly match, you can just flip a coin to determine who gets to break. The lag method is when both players would play two different cue balls that are of the same size up and down the table from the head of the table to the foot of the table, then whichever player’s ball comes back as close to the head side rails wins.

On that note, if both balls were to collide it is going to lead to a do-over if a player pockets their ball that player loses the game.

Adding the push-out features to the game is totally optional, this is mostly played by beginner-friendly players of the game. A push-out is a rule added to the game so that when your cue ball is in a tight shot a player can call push-out and just plays the cue ball randomly to the next and less difficult spot on the table.

The push-out rule will only be in effect after the player breaks the game, the opposing player will have the opportunity to call the push-out shot if they see that the break is difficult. Please note that the breaker of the game can also call a push-out shot if a ball was pocked on a break shot as well if not the opposing player has the opportunity to make the call.

On calling for a push, if on that push a numbered ball is been pocketed that won’t be added to your score, however, it will still remain pocketed but if the nine balls were to be pocketed, that ball will be taken out and spotted back on the foot string spot on the table. Some players will also state that they lose the game but that’s not true, after the push shot is excited, the opposing player can choose to play or pass their turn up as well.

9 Ball pool is a fun pool game to play with friends and family, I hope this article has taught you the basics and standard rules of the game and that you get an idea of how to play 9 ball pool. Please feel free to go check out some other related articles that are on my site, I love sharing my knowledge on the sport and keeping you up to date with the rules and other fundamental factors of the game.

You can also check,